This post was also published on The Paper Graders.

I was so glad to come across this book when I was finishing up my manuscript over the summer. (Look for Point-Less: An English Teacher’s Guide to More Meaningful Grading from Heinemann, available March 31!)

Though written by a college writing instructor, this book has giving me much to think about for my high school classroom, and this blog post reviews in particular what most resonates for me.

The problem as Inoue outlines it:

It is race that functions in daily classroom writing assessment practices, hiding behind power relationships set up by the judgement of student writing by teachers who use a dominant discourse. To put this another way, power is hidden more effectively because a set of white racial dispositions are already hidden in the assessment in various places, assumed as the standard.

To illustrate how this plays out for students, Inoue shares an exemplar provided by a college writing entrance assessment used to place students into writing classes. The exemplar is an example of a low scoring response according to the assessment officials, but Inoue analyzes it to show how the rubric–firmly ensconced in a dominant discourse made up of “white racial dispositions”–fails to see clearly the sophisticated thinking and writing the student actually did. Inoue does say that he has no way to know for sure that the exemplar comes from a student who may speak and write in a non-dominant discourse, but the response itself certainly eschews some sentence patterns and overall organizational patterns that are typically found in formal academic discourse (couched in the “white racial dispositions” “assumed as the standard”). It’s a convincing illustration of how writing assessment norms marginalize students. The student who wrote the exemplar that earned a low score on the assessment likely got placed into a lower track writing course, possibly even remedial, thus starting off college behind already.

In short, the rubrics we use to assess writing swim in a white racial way of looking at writing, and thus they fail to see all of our students clearly. What are we to do, then? Here’s more from Inoue:

I think our best strategy as antiracist educators is to change the way we understand and do writing assessment, while simultaneously building arguments and movements to change the larger structural racism in our society and schools. But this antiracist project begins in our classrooms because it is the only place we, as writing teachers, can begin.

So we need to push back at the larger structural racism intentionally. That feels overwhelming and daunting, at least to me–I have my moments where I think, I’m only one teacher. What can I do against the whole system? I can work in my classroom, within the circle of influence I have access to every day. But Inoue reminds us to begin with this in mind:

I love what Inoue offers as a strategy to push back at the white racialized discourses that dominate writing assessment. You’ll see me citing him in my upcoming book because he helps me to be okay with my move toward not evaluating my students’ writing, to using semester grades that are less about mastery and evaluation and more about capturing the work students have done. I’ve seen how powerful this shift has been for my students, but guilt nags at me that I’m somehow falling down on the job. I’ve been focusing my grading on the work my students engage in and the growth they can describe as they see it themselves, but I know the system expects me to make some kind of a definitive statement (with a grade) on the quality of my students’ reading/writing/thinking.

Inoue helps me with this because for final grades in his course, he focuses entirely on what he calls labor, meaning what the actual work of writing looks like. How much time to spend, how many words to write, what steps to follow, how to engage with classmates around each other’s writing–not meaning formulas for writing, but actually spelling out concretely what it looks like to do the work of writing. In my book, I talk about having to re-train students to do the work of learning rather than point collecting. Many of the strategies our students employ to collect points do not lead to learning. I spend a lot of time undoing those behaviors to get my students to the point where they can focus on learning instead. Inoue explains:

My assumption was that if students focused mostly on what they had to do in any given week, how long they had to do it, and why they were doing it, then the parts (the artifacts) would improve, as would their reading and writing behaviors, the real ecological products we were aiming for. Aditionally, by focusing mostly on processes (labor), students could slowly build over the semester more effective, intense, and productive labor by reflecting upon that labor in labor journals and weekly reflections. This would, I thought, translate to better writers, but not necessarily […] better documents.

Inoue anchors his class on a labor contract. You can see the entire contract in his book, but in short it’s this: he presents a list of work (tasks/assignments) students must complete to get a B in the course. For an A, he invites students to make a few of the tasks longer pieces of writing. That’s it. So simple. So liberating for students AND teachers. Students need not worry about losing points on rubrics so they can just focus on writing and taking the risks necessary to grow. Teachers need not worry about having to constantly evaluate and provide comments that justify the points they may have taken off. They can just focus on helping their students improve as writers.

He helps his students to understand the labor contract and what it is asking of them with some intentional norming conversations intended to also establish the norms of their writing community:

The contract was a place of norming, only not to a local dominant discourse or a local SEAE, or a white racial habitus, but to a negotiated set of practices and discourses about assessment and labor.

This norming in the place of the contract was not a one-way, hierarchical norming, but was a norming that students negotiated and had more control over than in typical academic places of norming and racing. In class discussions, I began by asking them: what responsibility do you have to your colleagues in our class and in your writing groups? What responsibilities do you expect of your colleagues around you? How does that responsibility translate into your own behaviors and labor in this class? What happens when someone doesn’t meet his or her responsibilities to others in this class? These discussions, because they implicitly built a rationale for our writing assessment ecology, especially the places of writing groups, which originates in the ecological part and place of the contract, were crucial to my students’ acceptance of the grading contract and to their abilities to do the labor required.

Can you imagine how these kinds of conversations would produce a classroom community that focuses together on the actual work of writing?

Here are the big ideas I take away from Inoue:

Back to school Monday after a restful winter break. I wish everyone well in the new year! 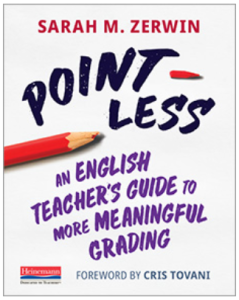